The LCBO And Structural Equation Modelling: How To Test Emotional Brand Connections

Likely the most well-known crown corporation in Ontario, the LCBO is actually one of the world’s largest buyers of alcoholic beverages. With 639 retail stores offering about 24,000 products annually, it’s no wonder. They service the beverage needs of an entire province and, last year, they made over $4.9 billion in sales – but for the LCBO, it’s about a lot more than that.

Since 1990, they’ve won over 200 awards in customer service – and keeping that level of care is no small feat. The LCBO is dedicated to understanding their customers, and that dedication is exactly what led them to partner with Environics Research in 2009. It was then that we began conducting our ongoing study to further the LCBO’s understanding of their customers.

Specifically, the LCBO sought to understand how exactly their customers perceived their brand, and how their emotions informed those perceptions. To put it another way, the LCBO already had a solid understanding of the tangible benefits they were providing, but what about the intangibles customers were receiving? How could they go about understanding the emotional connections and benefits customers shared with the LCBO?

It’s not an easy question to answer. It was clear to us at Environics that a standard customer satisfaction survey wouldn’t give us the insights that we needed. How could customers accurately explain their own emotional connections – and the roots of those connections – when many of these connections are completely subconscious? We needed a more in-depth analytical tool to draw out the emotional drivers that customers themselves might not even be aware they have. We needed an approach based on a structural equation model.

Now, unless you’re reading this as an experienced analyst, you’re probably wondering what SEM is. In it’s simplest terms, SEM is a statistical tool that lets us explore and measure the strength of causal relationships using a combination of qualitative ideas and quantitative data. It’s both confirmatory and exploratory, in that it can both allow us to test theories about how variables that we cannot directly measure (latent variables) cause or are caused by other variables, and to what degree, and also allow for new theories to be formed and tested.
As you can see from the example structural equation model below, various pathways are hypothesized and tested with customer data. Here, like the LCBO’s model, those pathways begin with in-store activators, which lead to customer benefits and key drivers of brand equity. Finally, those pathways end when an emotional or a rational connection, or both, is formed between the customer and that brand. It should also be noted that every different brand will have its own unique set of hypothetical pathways. The way that the model looks, and the pathways that are formed, will depend on how customers interact with the brand in question. 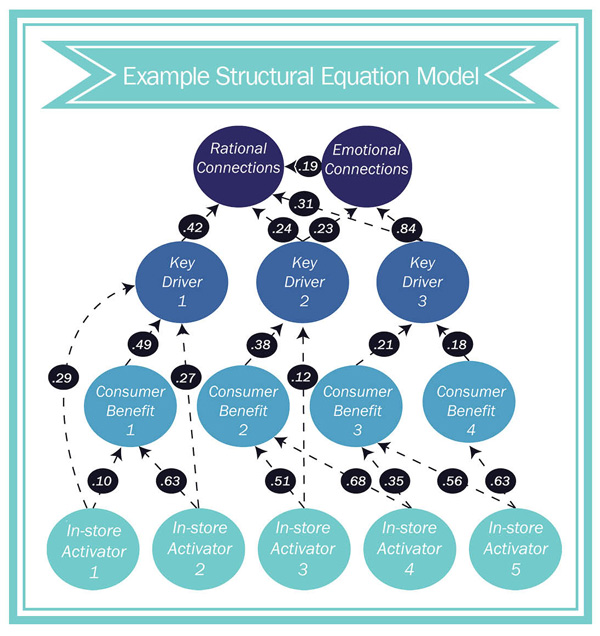 The model is shaped and validated until a “best fit” is achieved; this specifies both which pathways find support in the data, and also how strong they are (numbers closer to ‘1’ indicate stronger relationships). We can now see the most important pathways customers’ experiences take when forming emotional (as well as rational) connections with a brand, right down to the initial in-store touch points.

The basic strength of the approach taken here is that it allows us to estimate variables that we can’t measure directly, like those emotional connections that the LCBO was so interested in. Overall, this methodology was extremely well-suited for the LCBO’s needs.

We began building the model with traditional assumptions about customers’ brand perceptions, but also included a theoretical element relating to “brand bonding.” This would allow us to measure and size the more latent emotional connections customers had to the LCBO.

In the end, the data not only supported the traditional concept of brand equity, but a greater actionable insight was also formed; an even better statistical fit was discovered that treated emotional pathways as separate variables. The model now revealed a new – and formerly hidden – variable beyond brand satisfaction, the impacts of which could never have been measured directly.

The final model provided the LCBO with a map that laid out the various touchpoints and paths of their customers’ purchases, as well as a clear understanding of the subconscious emotional connections that drive them there – an extremely valuable tool for driving positive brand health. The LCBO can now use that model to explain, right down to the ground level, which of their marketing strategies are driving the positive brand relationships they have with customers, be they rational or emotional.

By understanding the specific paths of purchase their customers are taking and the variables (both emotional and rational) that are driving them there, the LCBO can market more efficiently. While other companies are using broader-themed marketing strategies, thanks to the analytics team at Environics, the LCBO now has the advantage of formulating and implementing more targeted strategies with quicker in-market results.

By John Crockett and Sara Plavsic | Article, Brand Health, Customer Experience, Technology and Commerce
Our team explores how brands can meet the ever-evolving needs and expectations of customers in the digital era using our new Frictionless Index toolkit.
Read More