Since Environics began tracking public opinion about the Energy East pipeline in 2012, between 60% and 65% of Canadians have supported the proposal to convert existing natural gas pipelines to transport crude oil from the oil sands to refineries in Eastern Canada and for export. 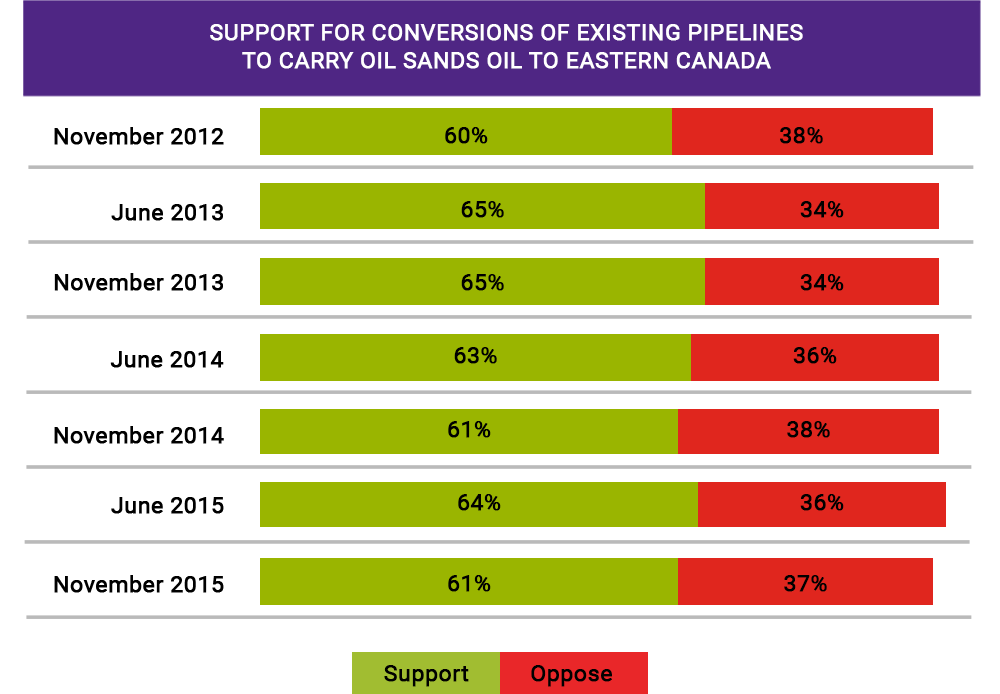 Most hold soft views on the pipeline proposal

In our most recent survey, completed between November 25 and December 4, 2015, nearly one in five Canadians (18%) strongly supported the Eastern pipeline proposal, while slightly fewer (13%) were strongly opposed. The upshot is that almost seven in ten Canadians have soft opinions on this matter – they are somewhat opposed (25%) or somewhat in favour (43%). It is also noteworthy that most of those with soft opinions about this pipeline proposal also report a lack of familiarity with pipelines generally, suggesting an opportunity for those on either side of the debate to convince Canadians of their position.

Looking across the country, the pattern is consistent – minorities in each region hold strong opinions, either for or against the pipeline, while the majority are somewhere in between. 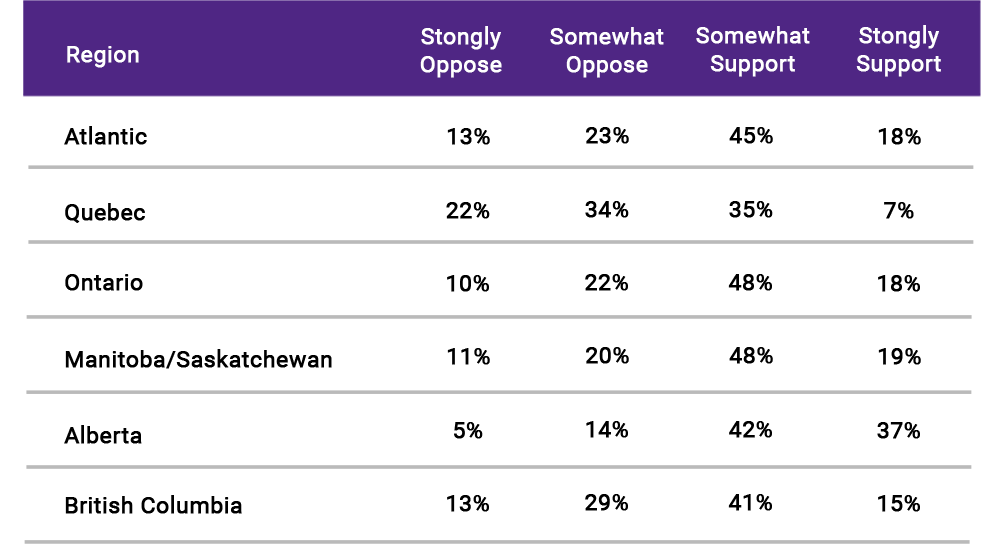 Quebec stands out as having the highest proportion of residents who strongly oppose the pipeline (22%) and the lowest proportion of strong supporters (7%). Nonetheless, four in ten Quebec residents are at least somewhat supportive of the pipeline proposal and, similar to other Canadians, seven in ten Quebecers hold soft opinions on the issue (34% somewhat oppose and 35% somewhat support). Albertans, meanwhile, are the most supportive of the pipeline proposal (37% strongly support).

Reasons for support and opposition

When Canadians are asked why they support or oppose the Eastern pipeline, the economy and jobs are part of the picture, but other factors also come into play.

Supporters cite economic and job-related reasons most often, followed by efficiency arguments (infrastructure already in place), “nationalistic” sentiments (keep the oil in Canada, Canada should benefit) and then environmental reasons. 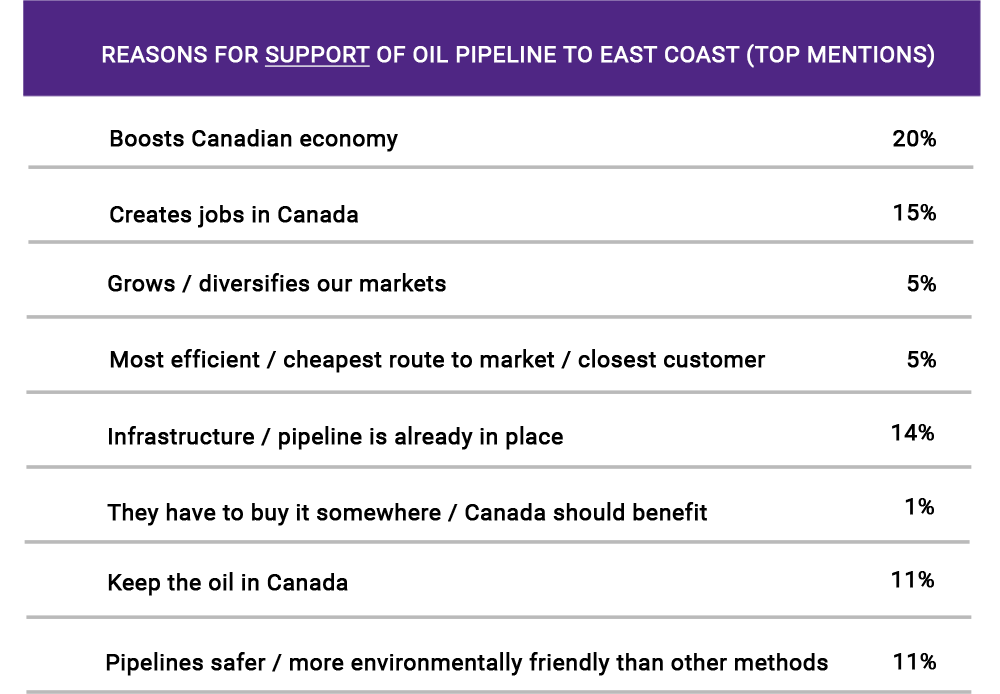 Opponents, on the other hand, cite environmental concerns most often, followed by safety concerns, risks of leaks, a preference for other energy sources, and opposition to exporting the product. 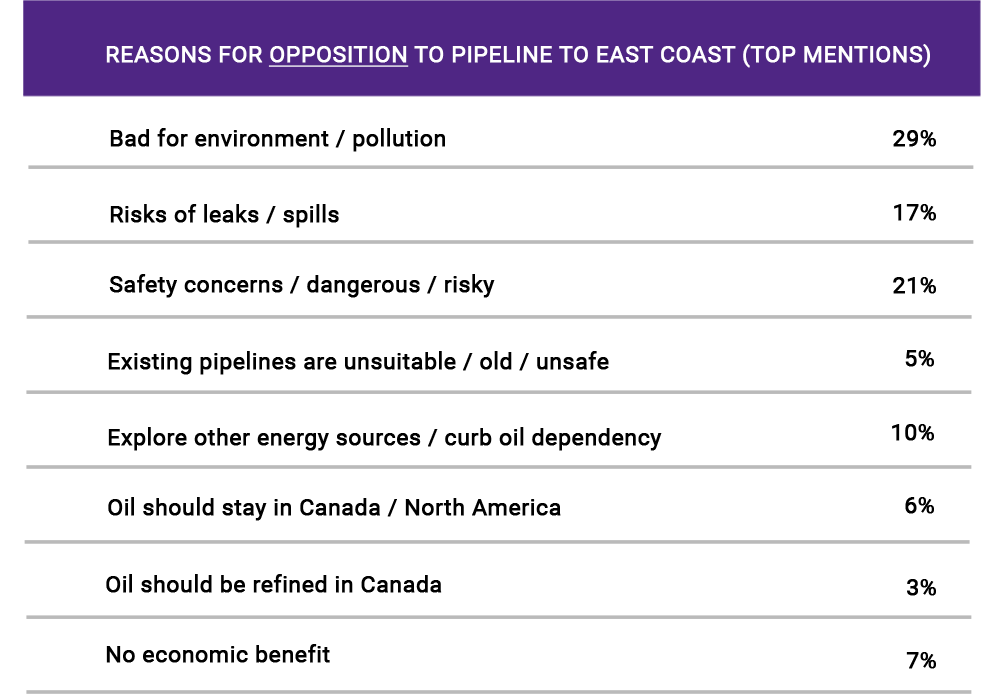 This research indicates that a sizeable proportion of Canadians have not formed strong opinions on Energy East, suggesting there is room for communications to influence attitudes on the issue. The research also suggests that, in addition to economic arguments, other factors – such as regulatory confidence, and safety and environmental concerns – are also important considerations.

A representative national survey conducted online November 25 to December 4, 2015 with 2,018 Canadians (aged 18 or older). Respondents were recruited to reflect the geographic and socio-demographic makeup of the Canadian population based on the PRIZM5 profiling system developed by Environics Analytics, which ensures proper representation and coverage across the country. Quotas were set by age, gender and province. 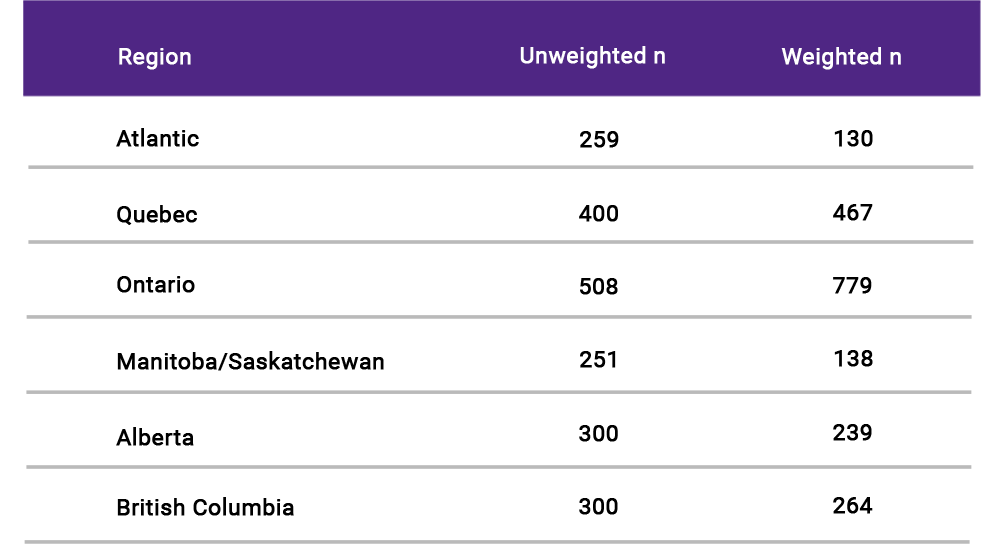 Final data are weighted to ensure the sample composition represents the actual population.

Environics is a Gold Seal member of the Marketing Research and Intelligence Association (MRIA), the industry association for public opinion research in Canada. MRIA standards limit statements about margin of error for online surveys such as this one.

Wording for survey questions included in this release

Most of the oil produced in Alberta’s oil sands is exported to other countries. There are proposals to build new pipelines to expand the capacity to deliver oil sands oil to the US and Asia. There are also proposals to take existing pipelines that currently transport natural gas and convert them to transport crude oil from the oil sands to refineries in eastern Canada and for export.

1) Do you support or oppose each of the following proposals for shipping oil sands oil to market?

2) [IF SUPPORT] Why do you support converting existing pipelines to carry oil sands oil to eastern Canada and for export?

3) [IF OPPOSE] Why do you oppose converting existing pipelines to carry oil sands oil to eastern Canada and for export?