Effective Flu Shot Communications Should Focus On Values Over Demographics

As fall turns to winter, public health officials are making their annual push to encourage Canadians to get flu vaccines. According to Health Canada, the share of adults who get flu shots has been nudging upward in recent years – but this group remains in the minority. Our own data finds that about 46% of Canadians get an annual flu shot.

What’s the best way to communicate to Canadians of the benefits of vaccination and encourage them to get it annually? One message won’t fit all. Canadians vary significantly in their social values, and values have a profound effect on how people think about their health care choices.

Using data from a robust survey on Canadian Health values and attitudes, Environics has developed a segmentation, PatientConnectTM, that clusters people in a social values framework, where we find five distinct segments of Canadians. These groups differ on decision to receive vaccinations as well as other health decisions – and that’s because Canadians differ in their fundamental orientations to key issues, including respect for authority, trust in science and technology, and sense of personal control

One message won’t fit all. Canadians vary significantly in their social values, and values have a profound effect on how people think about their health care choices. 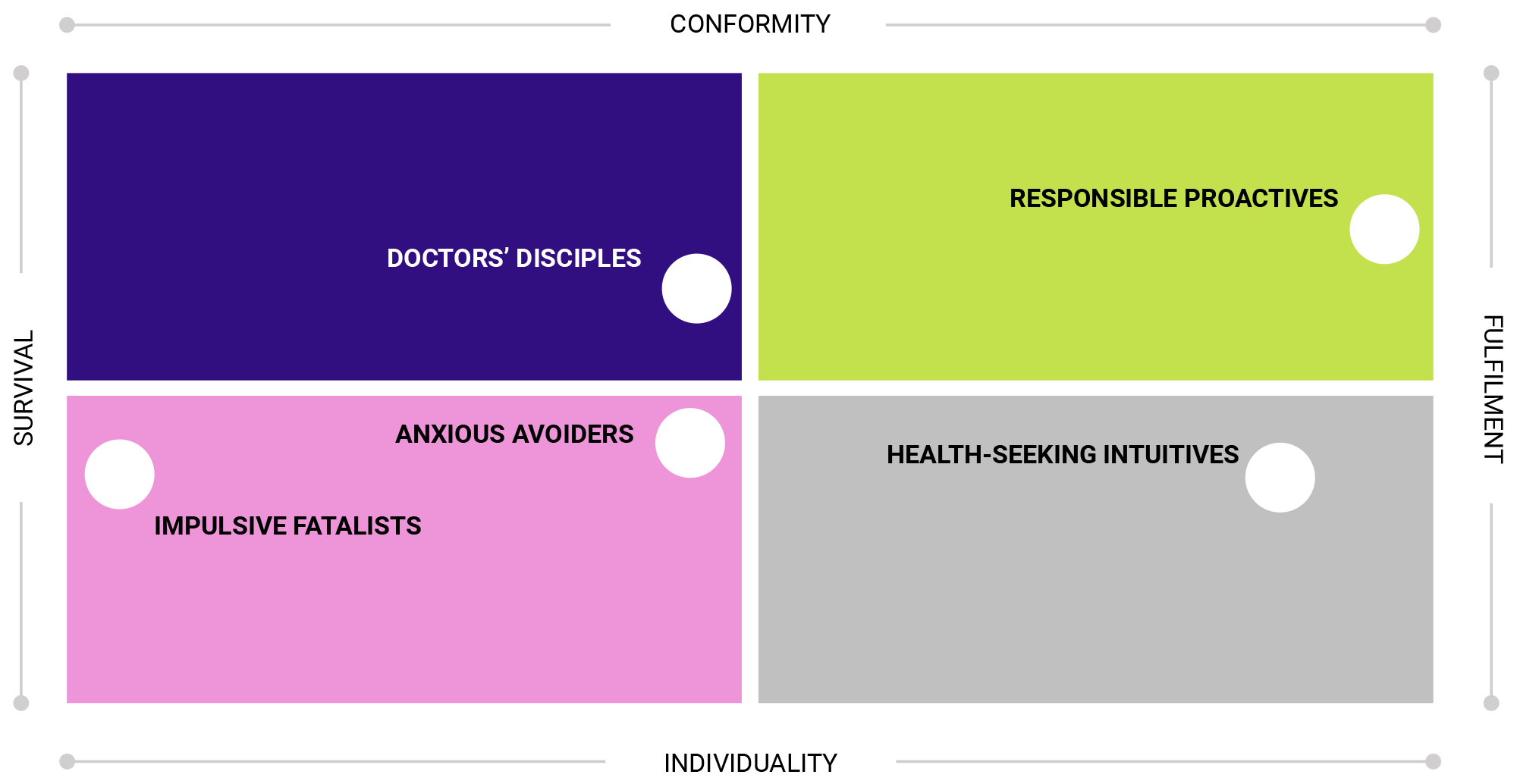 The group most likely to report getting flu vaccines are the Responsible Proactives; 59% in this segment get an annual flu shot. These Canadians feel a strong sense of responsibility for their own health, and they take many actions to stay healthy, including watching their diet and exercise, and attending recommended maintenance appointments with dentists and family doctors. They trust and respect their physicians, but they’re also likely to ask questions and believe that healthcare works best when doctors and patients work as partners. For these Canadians, a flu shot is one part of a year-round program of self-motivated maintenance and prevention.

Our analysis finds another group that’s more likely than the Canadian average to be vaccinated – but with very different motivations. The Doctors’ Disciples, 52% of whom report getting flu shots, are powerfully deferential to their doctors. They make relatively few efforts to promote their own health, mainly just hoping for the best. Their above-average tendency to seek out flu shots is driven, not by a sense of personal control and efficacy, but rather by a commitment to following doctors’ instructions and the respect they have for people in authority positions.

There’s more to the story than demographics

There are notable demographic patterns when it comes to influenza vaccination. Canadians who get the flu shot skew older, male, and more highly educated. But two people who appear the same on paper – same age and gender, same education and marital status – might differ sharply in their values and therefore in their orientation to their health choices. For health leaders seeking to promote vaccination, understanding people’s values can be a vital complement to knowing their demographic traits.

The Responsible Proactives and Doctors’ Disciples, for instance, are both older on average than the general population. But Responsible Proactives who get vaccinated do so because taking active steps to protect their health is fundamental to the way they live; Doctors’ Disciples get their flu shot because doctor knows best. The kinds of messages that would be most effective at leading members of either segment to seek a flu shot or adopt another recommended behaviour would be markedly different. One would appeal to ideas of personal control and autonomy, while the other would emphasize doctors’ expertise and the weight of scientific evidence.

From a strictly rational perspective, we might expect vaccination choices to be influenced by patients’ sense of their own risk of serious health complications from influenza. Not surprisingly, many campaigns (not only about flu vaccines, but about other vaccines and preventive measures) focus on raising awareness about the risks of the conditions and the value of prevention. But risk doesn’t resonate with all Canadians.

Responsible Proactives, the most likely of all segments to get flu shots, are more likely than others to describe their overall health as excellent, and more likely to be optimistic about their own future well-being. Their decision to seek out the flu vaccine is unlikely to be driven by fear about the risks they face; their behaviour is more linked to their self-identity as responsible guardians of their own well-being.

By contrast, another values segment, the Anxious Avoiders, stand out in their fear of illness – but their high levels of concern don’t drive them to take preventive steps. At 39%, they’re less likely than average to report getting flu shots. They’re also less likely than others to get regular physicals and visit a dentist. Why would a group that’s especially fearful of poor health do relatively little to protect themselves? These Canadians are fatalistic. They express little confidence in either traditional or alternative medicine, and they’re skeptical that factors they can control, like diet and exercise, can make much difference to their well-being.

Neither demography nor rational calculations of risk are, on their own, reliable guides to how patients will respond to messages either from their physicians or from public health officials. An approach informed by an awareness of the values that underlie people’s thinking – not only about their choices, but about their understanding of the very nature of health and health care – can help providers deliver more resonant and effective guidance to patients on issues large and small.

Has there been a loss of confidence during the COVID pandemic? Not among most Canadians