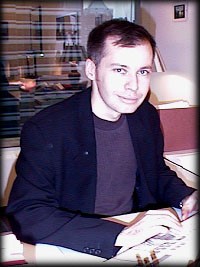 We are sad to share news of the sudden passing of former Environics Research colleague Sean Saraq. Sean died recently in a tragic accident at Iguazu Falls, on the Brazil/Argentina border. Sean worked at Environics from 1994 to 2000, when he moved to Montreal. While at the firm, he worked on a variety of market research projects and became fascinated with our social values work. He worked with Michael Adams and another former colleague, Mary Jane Lennon, on Michael’s first book Sex in the Snow. He also collaborated with Michael on his second book, Better Happy than Rich?

Since then, Sean has worked both for various advertising agencies and as an independent consultant. Sean had intended to move to Buenos Aires. He was a very intelligent person, with a great smile and copious enthusiasm for any project he took on. Sean had a deep interest in philosophy, in particular that of Friedrich Nietzsche, and wrote many thoughtful tracts of his own.

Sean’s sister Tracy Wilson would love to hear from friends of her beloved brother, please reach out directly if you had the pleasure of spending time with Sean in recent years.

This email has been created specifically for those who would like to reach out to his sister, Tracy. seansaraqthoughts@gmail.com

For anyone who knew Sean, you are invited to raise a glass in his name at the Burgundy Lion, at 2496 Notre-Dame West, on November 24, starting at 5:30 p.m.

ABOUT US | INDUSTRIES | CAPABILITIES | SOCIAL VALUES | FEATURED INSIGHTS | CONTACT US