Has there been a loss of confidence during the COVID pandemic?

Not among most Canadians

There’s been much speculation about a supposed loss of confidence in governments and public officials over the course of the pandemic. Anecdotes, including those reported in the media, could easily convince one that large swaths of Canadians have lost faith in leaders and institutions. The reality, however, at least over the past year, appears to be modest change. The squeaky wheel minority – those who claim that governments have disastrously mismanaged the pandemic and that the anti-mask, anti-vaccine protest movement represents a fed-up majority – has succeeded in creating a narrative that data don’t support.

Our data shows little movement on measures related to confidence in institutions and offices involved in Canada’s pandemic response.

Large majorities of Canadians continue to express confidence in frontline health care providers. Between 80% and 90% express confidence (either some or a great deal) in nurses, pharmacists, physicians, dentists and physiotherapists.

The next most trusted tier of health professionals includes massage therapists, the Public Health Agency of Canada/Health Canada, provincial chief medical health officers, the Canadian Chief Medical Officer of Health and chiropractors. Between two-thirds and three-quarters of Canadians express confidence in these figures.

At the low end of the rankings – but still earning confidence from a majority of 56% — are hospital administrators and provincial health ministries. 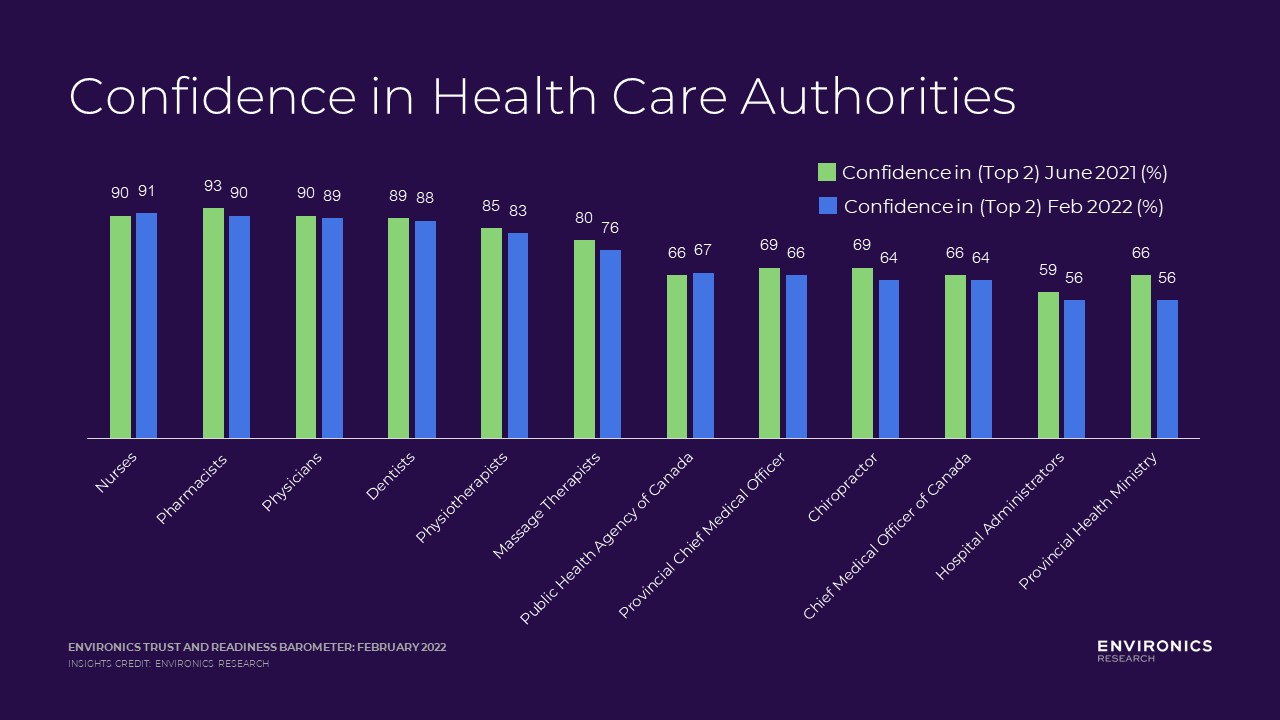 Have these numbers fallen? When we look at change over the months between June 2021 and February 2022, confidence levels are generally stable, with changes of one to three points, which can be considered statistical noise for samples of this size (approximately 1,000 per survey). In the case of provincial health ministries, however, the change was slightly more pronounced. The share of Canadians expressing confidence in these health leaders fell by about 10 points, a change that likely reflects the reality that Canada’s COVID infection rates were just coming down from their January peak when our survey was fielded.

Along with the decline of confidence in provincial health ministries, we also see a noteworthy increase in the proportion of Canadians feeling that the health care system is in crisis, from 54% in June 2021 to 69% in February this year.  This also likely reflects the situation at the time, as hospitalizations for COVID peaked toward the end of January but remained in the headlines during February.

In another question, we asked Canadians how satisfied they are with the federal government’s response to the pandemic. In both surveys (June 2021 and February 2022), 55% reported being either very or somewhat satisfied.

Taken together, these findings suggest that reports of a widespread loss of confidence are likely overstated. Although numbers vary somewhat, majorities of Canadians express confidence in health authorities and the general pattern over time is stability as opposed to decline. As for the noisy minority, our February 2022 survey shows that about nine in ten adult Canadians (aged 18+) have received at least two vaccine doses and only about 7% say they are not at all likely to get vaccinated. Our survey also reveals that eight in ten Canadians either like wearing masks (58%) or are okay with the practice (24%). About one in six say they’ll only mask up if forced (16%). The proportion who say they won’t wear a mask even if their refusal means being excluded from a particular location is 2%.

But while it does appear that only a small minority are oppositional when it comes to vaccines and masking, a significant share of Canadians accept others’ right to choose. For instance, when asked if focus should be on safety and keeping up with public health measures or on letting people make their own choices about living with COVID, a fairly modest majority (58%) emphasized the former priority. About four in ten (42%) emphasized letting people make their own choices. So, while the majority still prefer public health measures, a sizeable minority accept the right of the individual to choose.

It’s been a strange and frightening couple of years. Many Canadians now appear ready or even eager to resume elements of their pre-pandemic lives. Having the foundation of confidence and goodwill that these survey results reflect will surely help smooth that transition. Despite what social media and anecdotes of incivility might suggest, most Canadians are prepared to be reasonable and respectful in navigating a return to greater social contact – and they give institutions passing grades (and health care providers much higher marks than that) on their handling of the whole episode. The noisy minority is just that. It’s quite unlikely they have the numbers to elect a government, just as they were unable to rally many Canadians to their cause during the blockades.

Find out how our Public Affairs team can help your organization