TORONTO—
Eleven months ago, the Toronto Region Board of Trade released a concept paper called Superlinx: An Uploading Strategy for a Modern Provincial Transit Agency. In the paper, the Board called for all Toronto region transit to be uploaded into a single regional transit agency. The goal: Get transit lines financed and built more quickly, offering commuters a modern, seamless transit system.

Today, the Board released results from an Environics Research survey, confirming that residents support this transformative step. The concept of a single regional transit agency funded by the provincial government received support from 79 percent of regional respondents and 74 percent of Toronto respondents. 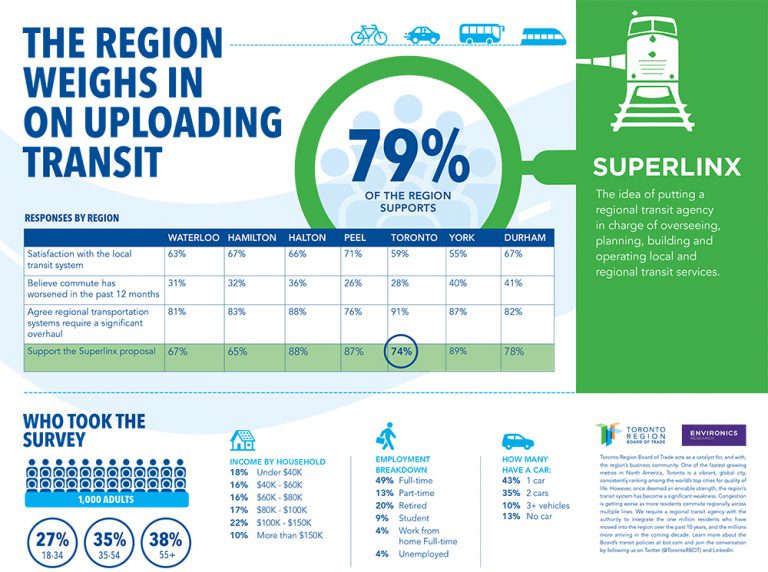 The survey comes at a time when the province is exploring options to upload Toronto’s subway system, as promised during the 2018 provincial election. The Board supports a subway upload as a first step, arguing that it should lead to other steps that will ensure a more regional model.

“We’ve spent twenty years urging the province to move growth revenues, financing capacity and planning authority down to cities to get transit built faster, and it hasn’t worked,” said Jan De Silva, President & CEO, Toronto Region Board of Trade. “It’s time to try to upload transit responsibility to the province instead, since that’s where growth revenues, planning authority, and financing capacity already exist.”

The 10-minute survey was conducted from August 13-21, 2018 among 1,000 adult residents of the Greater Toronto, Hamilton and Waterloo regions, with targeted samples for each GTA region. As the survey was conducted with an online panel and weighted for age and gender, there is no ascribed margin of error.

Learn more about the Toronto Region Board Of Trade

By Environics | Our Team
Alanna is a Senior Research Associate on the Corporate and Public Affairs team at Environics.
Read More