How to convince the reluctant

According to Government of Canada statistics, by early September about three in four Canadians had received at least one dose of a vaccine against Covid-19, and more than two in three were fully vaccinated. Calculated against the eligible population (people aged 12 and older), the figures are 84% with one dose and 77% fully vaccinated.

However, with the virus still spreading rapidly among the unvaccinated, leaders continue to seek ways to extend vaccine coverage farther. To achieve that goal, it’s useful to understand the thinking of those who are hesitant – and who may yet be persuaded to get a jab.

One bit of evidence comes from a survey we completed in June, with an online sample of 1,000 adult Canadians (aged 18 plus). Our survey asked people if they had been vaccinated and, if not, how likely they would be to do so when a shot became available to them. At that time, about eight in ten had already received at least one dose (75%) or said they were very likely to do so when they could (6%). The remaining group fell along a spectrum of hesitancy: from those who were somewhat likely to get vaccinated when eligible (5%) to those not very likely to get a jab (6%) to those who said they were not at all likely (8%). To put this last, most determined group in perspective, the anti-vax segment (8%) is about the same size as the share of Canadians who claim to have seen a UFO. 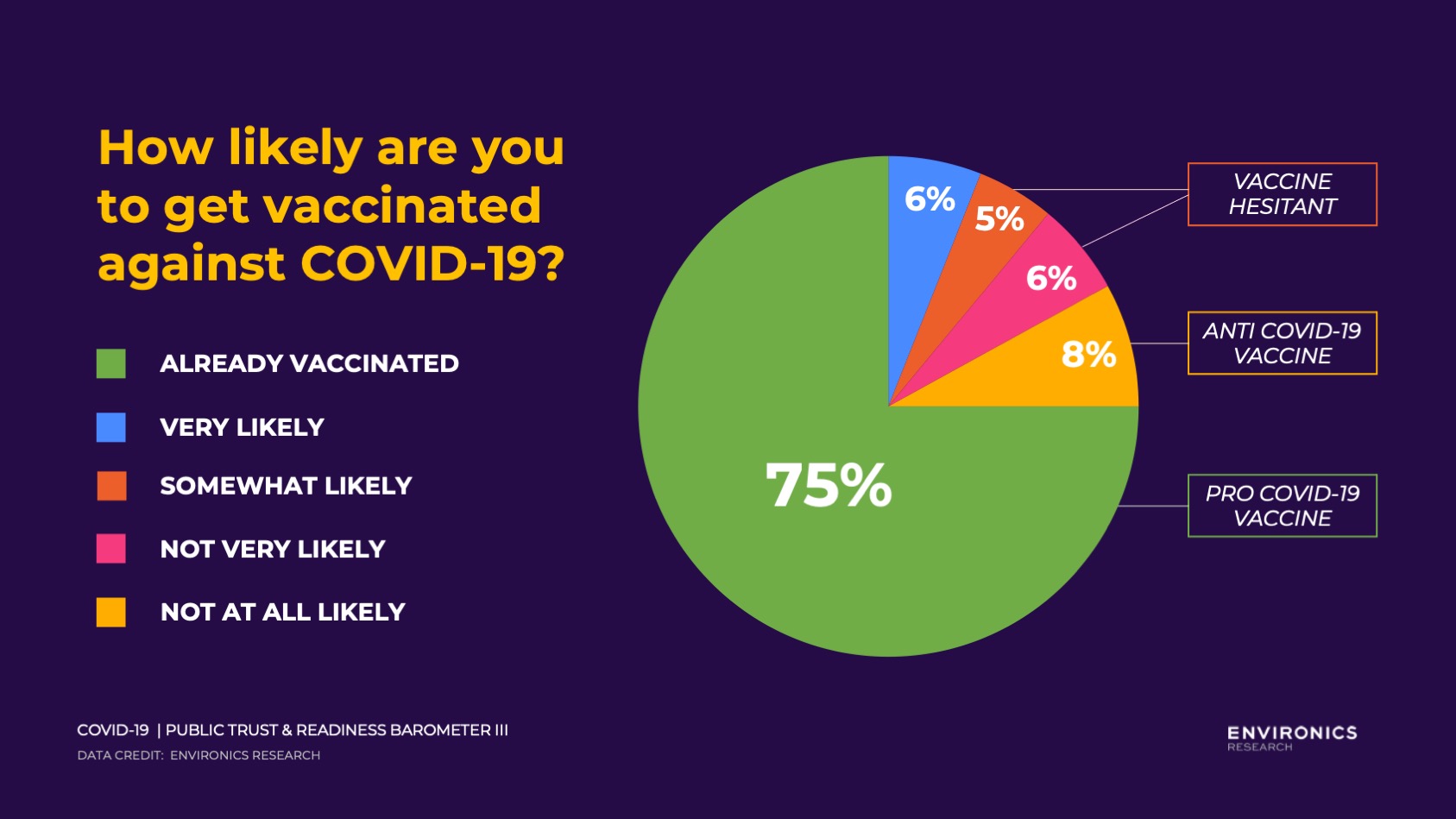 Canadians who are somewhat likely to get vaccinated described their thinking in one of two ways: some noted reasons to get vaccinated, while others expressed mild ambivalence, questions or uncertainty.

The following are examples of the types of responses provided by participants in our survey, completed in June with an online sample of 1,000 adult Canadians (aged 18 plus).

These are people who either simply haven’t gotten around to being vaccinated, or who have questions or concerns that a family doctor or another trusted, informed person could likely resolve.

Not At All Likely

At the other end of the spectrum are those who are not at all likely to get vaccinated. This is the group whose protests and disruptive behavior have been attracting media attention in recent weeks. The most common reasons for their positions include a lack of trust in the safety and efficacy of the vaccine, skepticism about the speed with which the vaccine was developed (including the idea that testing was rushed or inadequate), and in a few cases downright conspiratorial thinking about the governments and institutions encouraging people to get vaccinated.

These comments reflect the reality that this group will be much harder to persuade, and may in fact be unreachable – at least in the short term.

Between the somewhat likely and the not at all likely groups, we find the segment who are “not very likely” to get vaccinated. Some in this category might be open to reasoned argument; some will likely persist in refusing. The main reasons for hesitancy in this group include wariness arising from the speed of the vaccine development, concerns related to allergies or fear of needles, and general uncertainty and ambivalence.

This evidence suggests that there is a group of Canadians that likely won’t get vaccinated anytime soon, either because they don’t believe in vaccination at all, or because they don’t believe that the safety of Covid vaccines has been sufficiently demonstrated through testing. This group accounts for less than one in ten Canadian adults. The other 92% are either already vaccinated or may be prepared to roll up their sleeves to support population-level immunity.

Our findings suggest that most in the “somewhat likely” camp and even some in the “not very likely camp” will get vaccinated on their own or can be convinced. Some have questions or concerns that patient, informed health officials are capable of addressing. Others have fears unrelated to the vaccine (such as of needles) that may be overcome with understanding and sympathetic encouragement.

A successful push to improve vaccination coverage in Canada will rely on understanding peoples’ concerns and developing strategies to address them. Some of this might take the form of information campaigns, some might involve outreach by family physicians or other trusted parties, and some might require an incentive, such as vaccine passport mandates. Current efforts – such as bringing the vaccines to where the hesitant people are – seem to be on the right track and will likely see continued success if the providers persist in targeted outreach. There is no one-size-fits-all solution, but understanding where people are coming from and what motivates them can help leaders to shape their messages and focus their efforts on people who are open to reasoned discussion.

Letting People do What They Do Best

By Barry Watson | Article, COVID-19, Executive Decision Makers, Workplace Culture Spaces and People
Our President & CEO discusses the importance of putting people first and providing a sense of autonomy that suits them and the job.
Read More

The New Future of Work – Changes After a Year Plus Working From Home: February 2021 Edition

By Susan Seto and Michele Cunningham | COVID-19, Report, Social Values, Workplace Culture Spaces and People
Now, over a year into the pandemic, employers and employees’ focus has shifted from adapting to changes to improving their mental and physical wellbeing and planning for the many permanent changes the pandemic has started.
Read More

By Vijay Wadhawan | Article, COVID-19, Health and Wellness, Public Sector
Our team has taken a closer look at the values of Canadians not yet fully committed to the COVID-19 vaccine, to help inform effective persuasion strategies.
Read More
Explore more related insights
ABOUT US | INDUSTRIES | CAPABILITIES | SOCIAL VALUES | FEATURED INSIGHTS | CONTACT US