For most businesses and organizations in Canada, growth is a top priority. Achieving that growth, however, isn’t as easy as it used to be. Following the global financial crisis, pundits have described a “new normal” of cautious, value-focused consumers and stagnant markets. The baby boomers are aging; this large generation that has been responsible for so much growth over the past several decades cannot be relied upon to keep up their high levels of consumption and economic activity as they move into retirement. Their demanding and discriminating offspring, the millennials, are also a large generation but they currently lack the financial clout and confidence to fill the boomers’ shoes.

The challenge facing the leaders of Canadian organizations and businesses is to find the people—the customers, donors, voters, volunteers, fans—who will enable them to grow in the years ahead. So, where is the growth? One thing is certain: growth in Canada is new Canadians and their children—a more ethnoculturally diverse group than ever before.

If you’re holding this book in your hands, you’re probably familiar with the broad numbers. In one widely cited 2006 estimate (from Statistics Canada’s blandly titled Projections of the Diversity of the Canadian Population), by 2031 between 25% and 28% of the Canadian population will be foreign-born, and the proportion of Canadians who belong to a visible minority group will be between 29% and 32%. But most leaders of most organizations aren’t thinking about 2031. They are looking for growth opportunities now and over the next five years. Providing a road map to those opportunities is what this book is about.

for every $100 spent in Canada, $21 comes from someone who was not born here

Right now, according to Environics Analytics’ HouseholdSpend data, for every $100 spent in Canada, $21 comes from someone who was not born here. 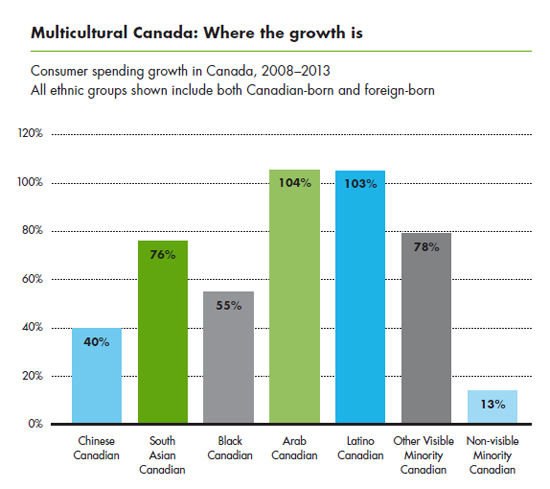 Strategies designed exclusively to meet the needs of the Canadian-born are appropriate only if you are willing to give up that $21. In cities, ignoring diversity means giving up even more of the spending pie.

And if you want to talk about growth, migrants and diverse ethnocultural communities are where the action is. Again, according to Environics Analytics’ HouseholdSpend data, total consumer spending in Canada has grown by 21% overall in the last five years (2008 to 2013)—from $976 billion to $1.177 trillion. But among some ethnic groups, the rate of growth over the same period has been dramatically higher. Among South Asian Canadians, the rate of growth has been 76%. Among Chinese Canadians, it’s been 40%. Spending among Latino Canadians has grown at an eye-popping 103%. These spending rates are unlikely to decline, since population growth and spending growth go hand in hand.

Environics Analytics’ DemoStats 2013 projects that, by 2018, the Canadian population will have grown to 36,708,145. But some ethnic groups are growing at a much faster rate than others. The population that once comprised Canada’s “bicultural” majority (white people of French or British heritage) is projected to grow by only 2.7%. Other groups—the rest of the “multi” in “multicultural Canada”—will grow by 18%, and will account for the majority of the country’s population growth (62%). In fact, overall growth in Canada looks distinctly Asian. Almost a third of the population growth in the next five years will come from Chinese, South Asian and Filipino Canadians.

Anyone looking for growth in this country simply cannot afford to ignore migrants, their children and the diverse ethnocultural groups that are growing rapidly, in both numbers and influence, in cities across Canada.

By Jodi Shanoff and Victoria Sicilia | Cultural Diversity, Public Consultations, Public Sector, Report
Environics Research, on behalf of the Durham Regional Police Services Board, conducted a public consultation to inform the process for appointing the Region’s Next Chief of Police.
Read More

Trying to conduct Inclusive Research? Here’s why you may not be doing it right…