This is part 2 of a 3 part release on Young Professional in Toronto.  View part 1 View part 3

TORONTO, ON—
As Toronto’s young professionals (YPs) look to grow their families, a lack of appropriate housing to meet their needs is becoming a concern, according to the second part of a survey on YP perceptions of the housing market released today by the Toronto Region Board of Trade. With 74 per cent of respondents saying they support measures to increase residential density, YPs overwhelmingly agree not in my backyard is no longer an option.

An infographic displaying the survey results is available for download on bot.com. 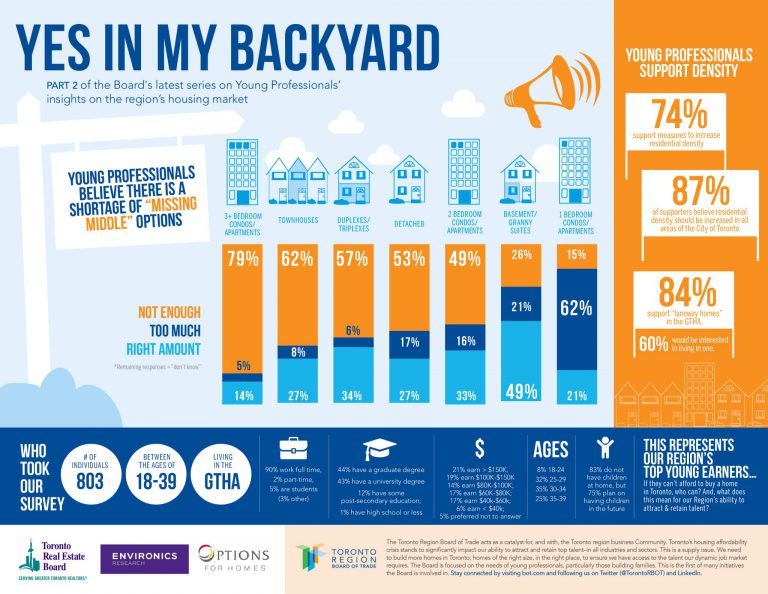 Of the more than 800 YPs between the ages of 18 and 39 in the Toronto region who responded to the survey:

This survey was conducted by Environics Research Group for the Toronto Region Board of Trade and sponsored by Options for Homes and the Toronto Real Estate Board. Last week the Board published the first in a series of three results focused on Toronto region YPs’ insights into the regions housing market with a particular lens on YPs’ concerns that at today’s prices & rents, housing is coming at the expense of their ability to repay debt and save for retirement. The survey is a follow-up to the results from Environics’ bi-annual Focus GTA survey asking 387 YPs in the GTA about their aspirations of home ownership.